Tourist Guide to Most Beautiful Mosques in Turkey

The mosques in Turkey are much more than just a prayer hall. They are a signature of the rich culture of the place, and a remnant of the great empires that have ruled over here. To get a taste of the richness of Turkey, make sure to visit the mosques on your next trip.

Turkey is a land that is immensely rich in terms of its history, culture, and heritage, dating back as far as the prehistoric eras. Every street of this country is filled with thousands of years of historical events, mesmerizing stories, and the vibrant culture that was the backbone of the many empires and dynasties that have ruled over Turkey. Even amidst the hustle of modern city life, you will find myriads of layers of profound culture and wisdom that it has earned from standing tall for thousands of years.

The great evidence of this rich culture can be found in the mosques of Turkey. Much more than just a mere prayer hall, the mosques hold some of the richest ancient histories and finest architecture of the time. With a marvelous aesthetic appeal that is bound to leave any tourist spellbound, Turkey has gained fame as a major tourist attraction thanks to these brilliant architectural pieces.

The mosques add a unique profoundness and character to the Turkish skyline, which can be found in no other place on Earth. With magnificent minarets and domes that stand out against the clear blue sky, Turkey holds some of the biggest and most beautiful mosques in the world. Not sure which mosques you need to add to your travel itinerary? Keep reading our article to find out more. 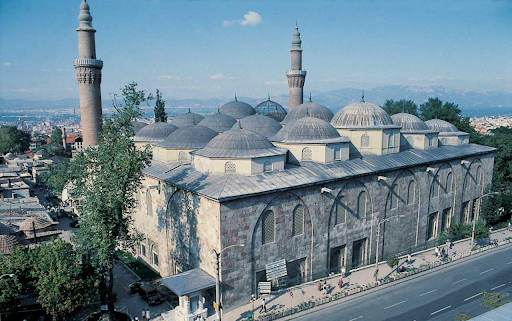 Built under the reign of the Ottoman Empire between 1396 to 1399, the Grand Mosque of Bursa is a marvelous piece of true Ottoman architecture style, heavily influenced by the Seljuk architecture. You will find some beautiful displays of Islamic calligraphy that have been imbibed on the walls and columns of the mosque, making the Grand Mosque of Bursa the best place to admire ancient Islamic calligraphy. Stretched over a sprawling area of 5000 sq m, the mosque has a unique rectangular structure with 20 domes and 2 minarets. 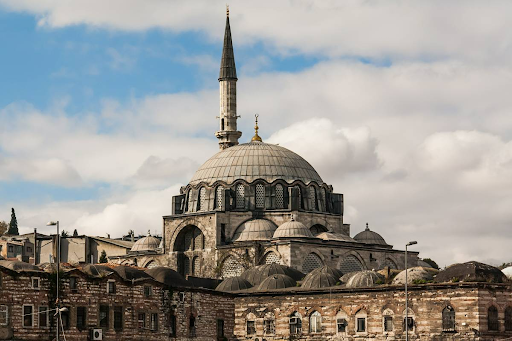 The Rüstem Paşa Mosque might not be the grandest architectural piece in terms of the most imperial mosques in Istanbul, but the spectacular Iznik tile designs of this mosque can put all the bigger projects to shame. Built under the Ottoman regime by architect Sinan, the mosque was financed by Rüstem Paşa, the grand vizier of Sultan Süleyman I.

With intricate floral and geometric patterns, the beautiful Iznik tiles decorate both the interiors and exteriors of the wall. Due to the relatively small size of the mosque, it is easier to examine and appreciate the beauty of the delicate artwork. Set above street level, the mosque is not easily visible to passersby. You will have to take up a staircase from the street, which will guide you to the front terrace of the mosque. 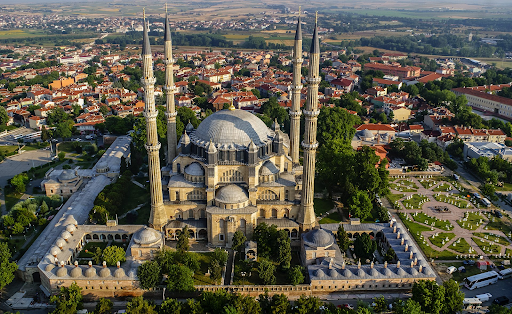 One of the biggest mosques in Turkey, the magnanimous structure of the Selimiye Mosque is stretched over an expansive land of about 28,500 sq m and stands on a hilltop. One of the most renowned skyline landmarks in Istanbul, the mosque was built by Mimar Sinan under the reign of Sultan Selim II of Edirne, the cap of the mosque has a unique feature that can hold up to 6,000 people in the huge prayer hall. Mimar Sinan, the most celebrated architect of the Ottoman empire, touted the Selimiye Mosque to be his masterpiece. The Selimiye Mosque was listed in the UNESCO world heritage site in 2011.

READ MORE:
European Side of Istanbul 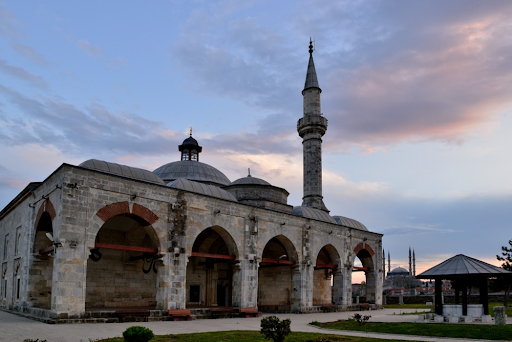 Sultan Mehmed III took over the reign of the Ottoman Empire in 1595, of which he was previously a governor, and commissioned the Muradiye Mosque to be built in the city of Manisa. Following the tradition of his father and grandfather, he gave the responsibility of designing this project to the famous architect Sinan.

The Muradiye Mosque is unique for offering the perfect perfusion of high-quality Iznik tile work that covers the entire interior space of the mosque, the beautifully tiled mihrab and illuminated stained glass detailings of the window give off the place a remarkable atmosphere. When entering the mosque, take a moment to admire the beautiful marble main door, with its detailed and majestic wood carvings. 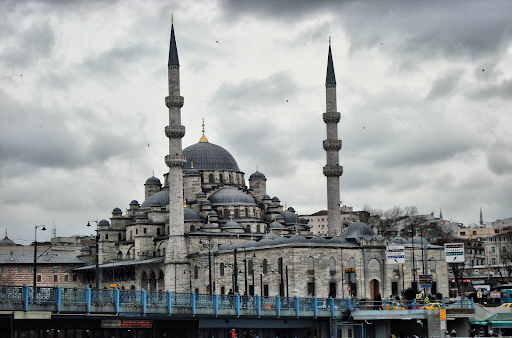 Yet another mammoth architecture that was crafted by the Ottoman family, the New Mosque in Istanbul is one of the largest and last creations of this dynasty. The construction of the mosque started in 1587 and lasted till 1665. The mosque was originally named as Valide Sultan Mosque, which means the Queen Mother, thus paying a tribute to the mother of Sultan Mehme III, who had given the order to commemorate the occasion of her son ascending to the throne. The grand structure and design of the New Mosque as a vast complex, not only serves religious purposes but has a huge cultural significance too. 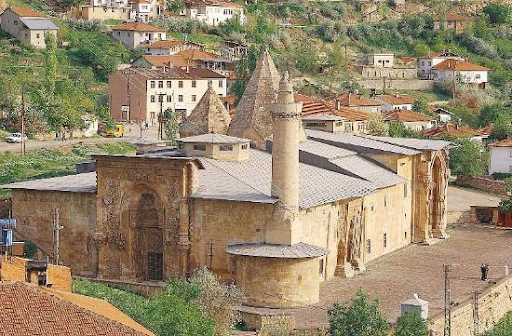 Sitting atop a tiny village on a hill, the Divrigi Grand Mosque is one of the most beautiful mosque complexes in Turkey. It has gained the UNESCO World Heritage Site status, thanks to its fine artistry. The ulu cami (grand mosque) and the darüşşifası (hospital) goes back to 1228 when Anatolia was ruled separately by the Seljuk-Turk principalities before they came together to form the Ottoman Empire.

The most remarkable feature of the Divriği Grand Mosque is the stone doorways. The four doors reach up to 14 meters in height and are covered with intricate geometric patterns, floral motifs, and animal designs. In the history of Islamic architecture, the mosque with its brilliant architecture is a masterpiece. Once you enter the mosque, you will be greeted by vaulted stonework, and the serene darüşşifası interiors have been deliberately left unadorned, thus creating a dramatic contrast with the elaborate carvings on the entrance. 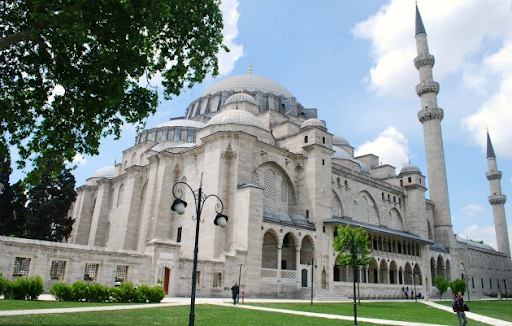 Yet another marvelous masterstroke by the maestro Mimar Sinan himself, the Suleymaniye Mosque falls amongst the biggest mosques in Turkey. Built around 1550 to 1558 under the order of Emperor Suleyman, the mosque stands tall on the Dome of the rocks of the Solomon temple.

The prayer hall has a vast domed interior space that is lined by a mihrab of Iznik tiles, embellished woodwork, and stained-glass windows, here you will experience serenity like no place else. Suleyman proclaimed himself to be the “second Solomon”, and thus passed orders for this mosque to be constructed, which now stands tall as a lasting remnant of the golden age of the Ottoman Empire, under the rule of the great Sultan Suleyman. 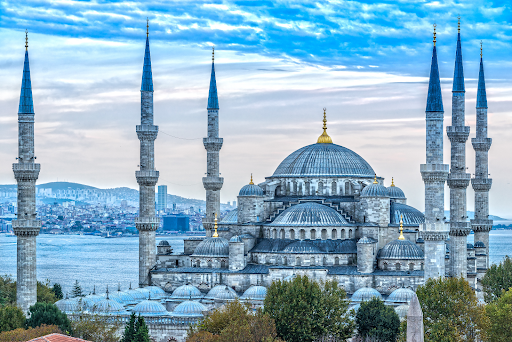 Constructed under the vision of Sedefkar Mehmet Aga, The Sultanahmet Mosque is undoubtedly one of the most famous mosques in Turkey. A true wonder of intricate architecture, the mosque was built between 1609 to 1616. The mosque observes thousands of international visitors each year, who come here to admire the beautiful and detailed architecture.

The oldest structure to have six minarets surrounding it, the mosque built a reputation for being one of its kind at the time. A few similarities of the magnificent structure can be found with the Suleymaniye Mosque, and its unique use of Iznik tiles gives the Sultanahmet Mosque an elegance that is still unmatched by any other mosque in Istanbul, to this day! 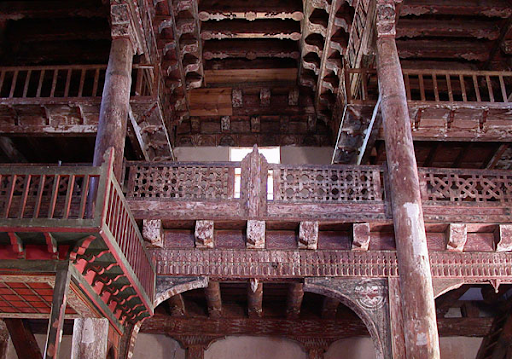 If you find the intricate carvings of mosque interiors beautiful, the Mahmud Bey Mosque has a lot of surprises for you in store! Built around 1366, this elegant mosque is situated in the little hamlet of Kasaba, situated at about 17 km from Kastamonu city, and is a brilliant example of the fine wood-painted mosque interiors in Turkey.

Inside the mosque, you will find numerous wooden ceilings, wooden columns, and a wooden gallery that is ornately carved with intricate floral and geometric patterns. Although a bit faded, the designs and wood carvings have been well looked after. The interior woodwork was done without the help of any nails, using the Turkish Kundekari, an interlocking wood joint method. If you want to take a close view of the murals etched on the ceilings, you are allowed to climb onto the gallery as well.

READ MORE:
Top Things To Do in Ankara - Capital City of Turkey 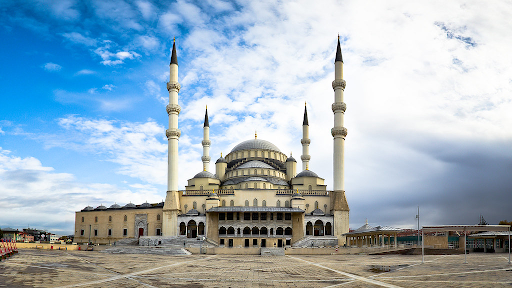 A mammoth structure that stands tall amidst the glittering city landscape of Ankara in Turkey, the Kocatepe Mosque was constructed between 1967 to 1987. The magnanimous size of the giant structure makes it visible from almost every nook and corner of the city. Deriving its inspiration from the Selimiye mosque, the Sehzade masjid, and the Sultan Ahmet mosque, this magnificent beauty is a flawless blend of Byzantine architecture with neo-classical Ottoman architecture.