Lakes and Beyond – Wonders of Turkey

Turkey, also known as the land of four seasons, surrounded on one side by the Mediterranean Sea, becomes the intersection of Europe and Asia, making Istanbul the only country in the world located on two continents at once.

It is indeed a jewel which shines bright with its natural wonders and ancient secrets. What you know about Turkey could be only the surface of a beautiful tapestry, as this country is way beyond the famous streets of Istanbul and mainstream travel destinations. With some of the largest mountain ranges, glacial lakes and national parks, along with dozens of UNESCO world heritage sites, read along as you journey through this land full of ancient and modern surprises.

Antalya, also known as the blue city, is known for its longest coastline in Turkey. Situated in the Turkish Riviera, also known as the Turquoise Coast for its blue and emerald beaches, the city, though flooded with luxury hotels, still makes sure to leave an impact with its scenic and peaceful views.

Antalya, being Turkey’s biggest international sea resort, welcomes millions of tourists each year with rising development and funding by the Government to promote tourism in the city.

A Heaven from Above 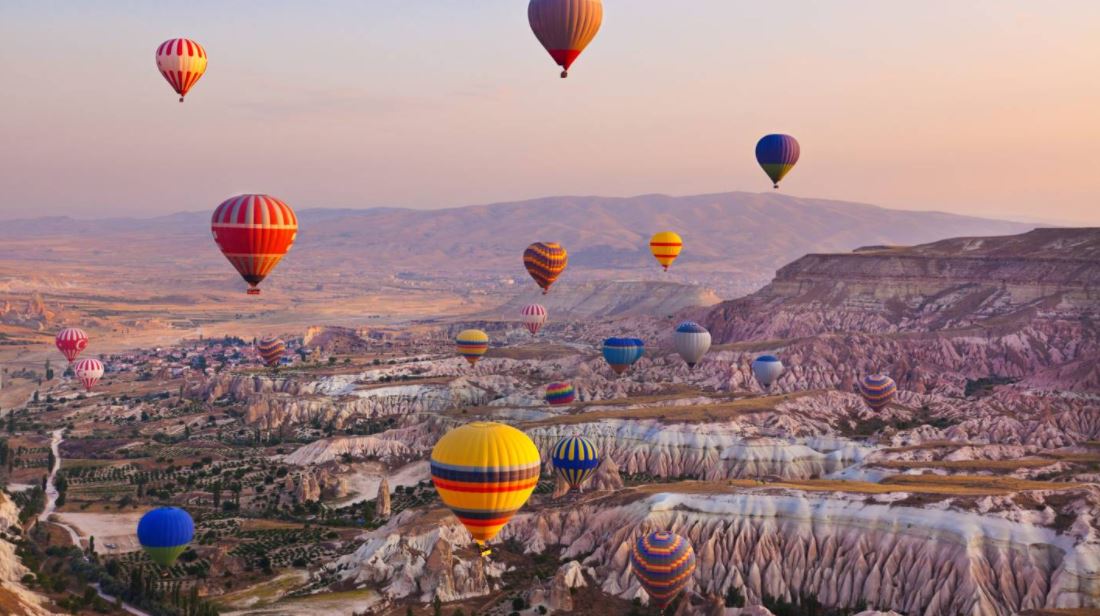 One of the classical regions of Asia Minor, Cappadocia is home to some famous UNESCO world heritage sites which include national parks, rock sites and a number of underground cities. Home to many ancient ruins, Cappadocia has many smartly designed underground cities with traps located at many locations within the old remnants of these ancient wonders.

The roots of the city go back to the Roman period with many ancient ruins visible, along with natural wonders, with the most famous being the ‘fairy chimneys’ which are cone shaped rock formations spread far and wide around a valley. One of the best ways to gather these views is to take a hot air balloon ride as the sun paints the valley in beautiful shades of orange.

Besides, the place is also famous for its cave hotels in Turkey.

Karagol, a name which means black lake in Turkish, is by all standards more appealing than its name. The lake being situated in the black sea region of Turkey appears the darkest of the blue on the surface, hence getting its name as the black lake.

Kargol Mountains are home to many glacial lakes, with Karagol Lake being one of the crater lakes in the region. Karagol is one of the main tourist attractions of Giresun Province in the Black Sea region of Turkey.

Into the Blue Lagoon

Located in the Turkish Riviera, Oludeniz, which in Turkish translates as the blue lagoon, is a beach resort in the southwest of the country. The beach is famous for its wonderful shades ranging from deep blue to light turquoise. It can also be called as sea of stillness with its calm nature irrespective of the weather conditions. The amazing views of the deepest blues meeting the lush green land can be experienced through many available paragliding opportunities in the area. For its apt location Oludeniz is also known as one of the best paragliding destinations in Europe.

The third highest mountain of Turkey with a height of more than 4000 meters, Mount Cilo as nature’s attraction is growing among nature enthusiasts and photographers. It was only in the last decade that the Cilo Mountains were opened for tourists for visits after being declared as a national park. Beside, the second highest mountain in the country is also one of the most visited areas with its abundant waterfalls and beautiful valleys.

Butterfly Valley- Just As It Sounds

In one of the prominent tourist destinations in Turkish Riviera, by the meditarrean sea, lies a valley famous for butterflies . This line surely did not jump out from a story book. With rich flora and fauna, the variety of butterfly species can be found in the month of September to October in the region. Also home to small beautiful waterfalls and clean beaches this place could easily be mistaken for a tiny wonderland from the book of dreams. Butterfly valley is also known for promoting ecotourism and any construction for commercial purposes is prohibited in the region. 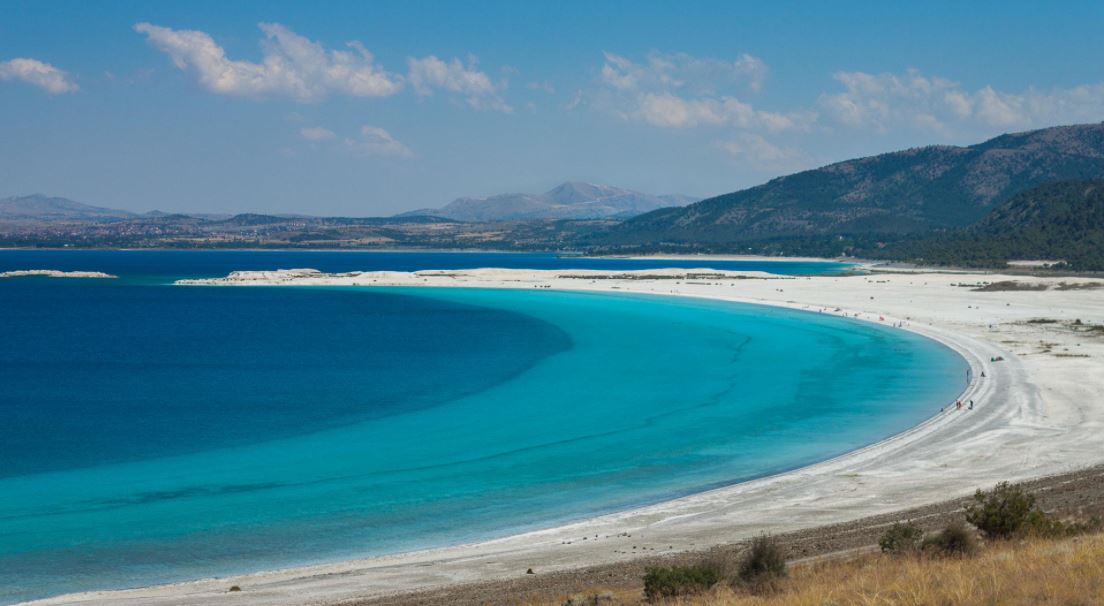 Although Turkey is home to a number of lakes, Salda lake, located in southwest Turkey is a lake of its kind. Being a crater lake, Lake Salda has waters with unique properties making the place famous for excursions for various purposes, one of reasons being a mineral found in its waters believed to offer remedy for various skin diseases.

The lake has also been subject to various academic studies with its mineral and rock formations found to be closest to that found on mars. Lake Salda is also considered as one of cleanest lakes of Turkey with crystal clear waters and a good place to swim with lukewarm temperatures. 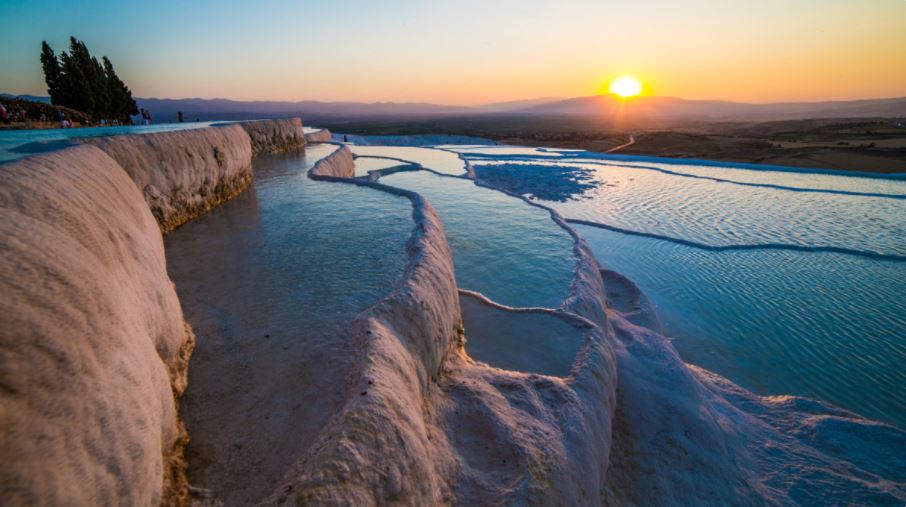 Commonly known as cotton castle, Pamukkale, located in southwest turkey is the area famous for its thermal springs. Mineral rich water from the mountains flowing through the mineral terraces collects as a pool of water below thus making this unique formation. The travertine terraces, formed through mineral hot springs are white in appearance and are formed after crystallization of calcium carbonate. Travertine terraces of Pamukkale are one of the gorgeous UNESCO world heritage sites of Turkey.

The lake has also been subject to various academic studies with its mineral and rock formations found to be closest to that found on mars. Lake Salda is also considered as one of cleanest lakes of Turkey with crystal clear waters and a good place to swim with lukewarm temperatures.

Turkey, a country which offers an intersection of cultures from different parts of the world is also a place of grandest images from nature with exceptional views and surprising turns at every end. Make sure that visit to this Mediterranean nation is not limited to industrial towns and bustling bazaars. Sunsets are more than just a view from that hotel window just as a country is way beyond its urban towns.