Everything You Need to Know About Turkish Oil Wrestling

Turkish Oil Wrestling or Yagh Gures is the national sport of Turkey and is one of the oldest sports in the world. It is contested between two oil-covered wrestlers, known as “Pehlivan”, and takes place on a square grass field that has no standard size.

In this article, we will be giving you a broad overview of everything that you need to know about Turkish Oil Wrestling, so keep on reading! 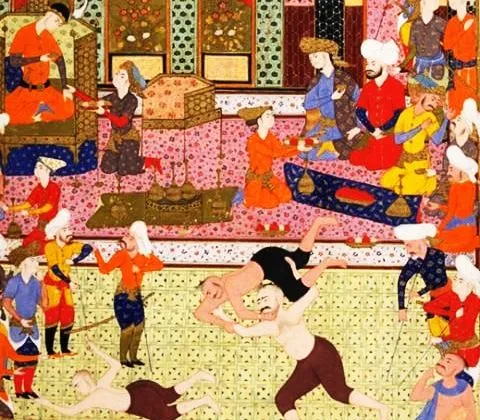 Turkey has been a seat of civilization for many centuries, and a country whose sporting traditions stretch back just as far. Legend has it that in the 14th century, Suleiman Pasha and his band of 40 ottoman warriors set up camp in a village called Samona. It is where the men took up wrestling - two of them wrestled from dawn until midnight when they collapsed dead from exhaustion, thus the Kirk Pinar oil wrestling festival was born.

Since 1924, this tournament has taken place in Edirne, on the borders of Bulgaria and Greece. The location may have changed, but its importance to the people of Turkey remains the same. 1995 marked the 624th edition of the festival. Being such an ancient tournament, Kirk Pinar is steeped in tradition. 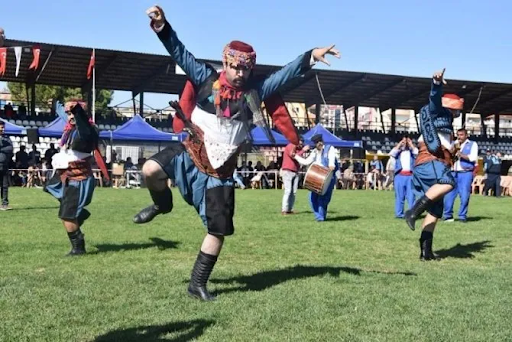 Before the three day competition begins, a procession of dancers and dignitaries march through the streets of Edirne. The honour of carrying the flag is given to the champion wrestler of the previous year, otherwise known as the “Bash Pehlivan.” Wreaths are laid in memory of all those who have fought before, and prayers are set for the souls of the deceased wrestlers.

Over at the stadium, as the party is just about to begin, huge crowds gather in anticipation of the action to come. Inside, the competitors prepare for battle.

This is the sport of Yala - traditional Turkish oil wrestling. In it, all the wrestlers wear “kisbet”, which are leather trousers specially made from a calf hide or water buffalo. The section below the knee is known as the “patcha”- pieces of felt are placed underneath the leather and tightly tied. Around the waist is the “kasnak”, which is also tightly fastened with a rope.

The aim of these preparations is to make it as difficult as possible for wrestlers to get a grip on their opponents. This also explains the oil - in order to make it virtually impossible to get a grip on one's opponent, the wrestler's bodies are covered in olive oil. 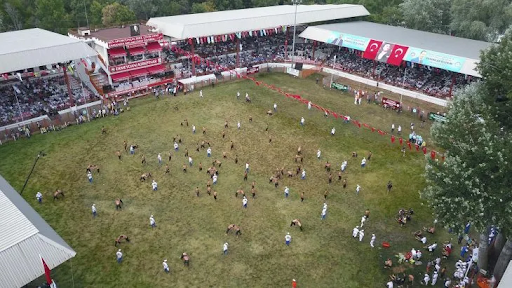 Yagh Gures is contested between two oil-covered wrestlers, known as “Pehlivan”, and takes place on a square grass field that has no standard size.

The objective of the game is to force your opponent to expose their belly towards the sky, making them fall over onto their side, or to lift your opponent from the ground and carry them for a number of steps. If you manage to do any of these things, the referee will stop the contest immediately and you win the match.

Now, you might be thinking what's with the oil? Even though this looks kinda strange, there is a very good reason for it. Before a contest begins, wrestlers will be covered from head to toe in olive oil.

This is for several reasons - the main reason is to make it incredibly difficult for your opponent to grab anything. It seems counter-intuitive, but it levels up the playing field massively. Size and strength are only useful if you could actually grab your opponent, so the olive oil removes that advantage. Wrestlers must rely on speed and technique in order to win this contest. This ensures that wrestlers of different weights can wrestle each other fairly.

The second reason is that it has a cultural and spiritual meaning and rather conveniently, it also acts as a mosquito repellent.

Wrestlers must wear heavy water buffalo leather pants, known as a “kisbet”, which weigh around 13 kilos each and must also be oiled to prevent your opponent from grabbing them. Once the referee tells you to go, the match begins.

READ MORE:
Tourist Guide to Most Beautiful Mosques in Turkey

Rules Of The Game 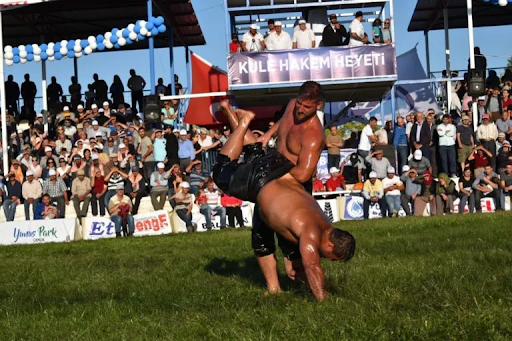 You are allowed to push your opponent, grapple your opponents, trip them up, throw them to the floor, or lift your opponent completely from the ground. The idea is to get your opponent to expose their belly towards the sky or force them to fall back onto their side. The main way this happens is to pin their shoulder blades to the floor. This is similar to a pin in modern wrestling, and this would win you the contest immediately.

But in general, doing anything to have them fall onto their back or forcibly onto their side counts. It only has to happen for a split second, so understandably wrestlers are incredibly cautious about protecting their torso. The other way to win is if you manage to pick up your opponent and walk for three or five paces depending on the tournament. This shows physical superiority and once this happens, the referee will stop the contest and award you the win.

Believe it or not, putting your hand down your opponent's pants are perfectly legal and it is actually encouraged! Since grabbing onto your oiled up opponent is difficult, wrestlers find any way to hold on to their opponent to exert force on them.

Putting your arm down your opponent's kisbet, to grab the inside leg, or using the waistband of the Kisbet is a good way to do that. There are various techniques that you can employ with your hand down their trousers that can leverage your opponent's body out of position.

However, you cannot grab their penis and you cannot stick your finger up their anus. There are also other things you cannot do, such as you cannot strike your opponent, poke them in any sensitive area, or verbally abuse your opponent or the referee, and if your kisbet comes off during a match, you are disqualified immediately.

Extra time is an extra period of anywhere between 10 and 15 minutes, where the wrestler’s techniques are given a score by judges. If no wrestler wins outright, the highest point score at the end of this period wins.

Indefinite time has no time limits and coloured bands are tied to the wrestler's ankles. They carry on wrestling until one of them wins the contest or if one of them pulls the colour band off their opponent. The first wrestler to do this wins.

Things To Know Before You Watch The Game 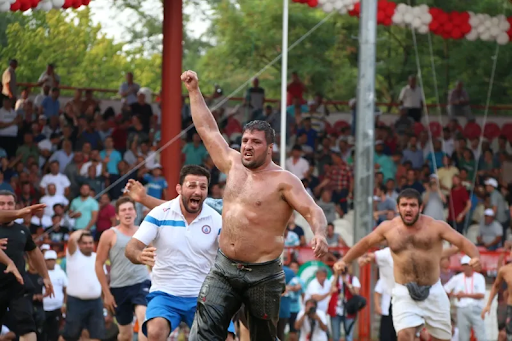 Whilst the rules of Turkish wrestling are easy to understand, there are a few other things that you will need to know before playing or watching Turkish oil wrestling. For example -

Pesrev - Before each bout begins, wrestlers warm up in a ritual called “pesrev”. Without going into too much detail, the process which looks a little like a dance, involves walking several paces to and from your opponents, bowing down on your left knee to put your right arms on the floor, touching your knee, lips, and forehead, before shouting at yourself for encouragement.

Oiling - As you have probably guessed, it is advantageous to have plenty of oil on you. Not only do wrestlers oil themselves, especially down their trousers, but other wrestlers and random people armed with pitchers full of olive oil will help you out with that. Wrestlers reserve the right to add more oil during the contest and pause the bout if they need to wipe it from their face, but only at the discretion of their opponent.

Music - During bouts, you might hear Festive Turkish music. This creates an atmosphere during bouts and is usually played by up to 20 drummers and 20 flute players.

Cazgir - The referee in a Turkish Oil wrestling match is known as a Cazgir. He is usually dressed in white with blue trousers, and their job is part to master the ceremonies and part of a referee. He is responsible for leading prayers, introducing the wrestlers to the crowd, ensuring that bouts are fought fairly, and announcing the winner by holding their arm in the air after a contest.

Forfeit - If a wrestler cannot continue due to injury or tiredness, they can announce that they do not wish to continue to their referee and to their opponent. At this point, the referee stops the contest immediately and the opponent is declared the winner.

Kirk Pinar - Turkish Oil wrestling matches usually take place in tournaments throughout the year. The most prestigious of which is the Kirk Pinar, which happens each year at the beginning of July, in the city of Edirne. This is the oldest sporting contest in the world and has been contested continuously since at least 1346 AD.

It is a three-day contest with roughly a thousand wrestlers competing in an elimination style format. If you lose, you are eliminated from the tournament. This carries on, until there are two wrestlers left who contest the final. The last one standing earns the title of “Baspehlivan”, or the “champion of Turkey”. A hundred thousand dollars cash in prize money is presented with a gold belt, which they can keep for a year until the next tournament.

If you win the gold belt three years in a row, you get to keep it permanently and are forever immortalized as one of the best oil wrestlers in the history of the world.

Though it might seem strange to anyone who has not seen it, Turkish oil wrestling is a fascinating sport full of history and culture. So, for the next time that you head over to Turkey, make sure to participate in an exciting match of Kirk Pinar!